Multidisciplinary artist whose work explores the construction of identity, Lou Rie (Marie-Lou Desmeules) has conquered many countries' attention by creating impactful representations of modern personalities and pop figures. She was awarded a fellowship residency at Anderson Ranch Arts Center, in Colorado, in 2017. Her work has been exhibited in several countries all over Europe and North America since 2005, present in the Spanish television series "Maricón Perdido" and runner up with her latest film at the Interfilm Festival in Berlin, Germany. Marie-Lou is co-founder and Head of Art at HARI Historical Art & Research Institute.
" When Marie-Lou did her surgery on me, I felt I came to an inner pause. A few hours of reflection in which she transformed me. The experience of me looking outside from a character, an identity that is only visible from the outside, and unknown to me from the inside, changed, from that moment on, my way of experiencing myself in the world in my daily life. I had learned that I will never know how others see me, that I have no control at all of how I am perceived by others, so why should I try. "

Samuel Otte
​Visual Artist & Performer
" Canadian visual artist and performer with studio in Barcelona, Lou Rie paints not on canvas, but directly on human bodies. While sarcastically attacking the eternal beauty of the idols of our world and unlike body painting, her artistic approach consists of confronting these "models" with the "super heroes" of collective memory. In these acts / performances / workshops, that she ironically calls "surgeries" she intervenes with a lot of energy, color and humor on the face of the models by destroying with joy all the canons by leaving place to a devastating laughter."
​
Arotin & Serghei
​Visual Artists Duo
​"No matter who her subject is, or how visible they are in the public eye, Marie-Lou Desmeules uses her paintbrush as a “scalpel” to brilliantly disfigure and dissect the exterior image, thereby uncovering a powerful—and universal—sense of human vulnerability. ​" ​​
"... but when it comes to the unusual and intriguing living sculptures of Marie-Lou Desmeules, the balance of art and life is once again challenged in a unique way. Her work wraps normal people in the shell of celebrity, pop culture, or historical figures as a form of living art. Although at first it looks like a grotesque depiction of recognizable people, and the artistic merit may be questionable, the form is actually a meticulously crafted and philosophically relevant analysis of culture and the way that people in the public eye are perceived by the masses.


Granted, the initial impression of Desmeules' work is typically one of shock and surprise, but the people she is attempting to represent are unmistakeable. Although the contours of their faces or the shape of their bodies seems muddled or distorted, their posture, clothing, facial hair, and a dozen other recognizable attributes are pieced together in our minds through the recollection of thousands of other perfect images that we've experienced, and the subject becomes instantly recognizable. If the same thing was done to a normal person, perhaps even a friend of ours, we might struggle to know who was trying to be depicted, but when it comes to iconic individuals, our brains have an immediate association, and the abstract, jagged forms become clear.


The relationship of modern culture to celebrities is a strange one, and we often begin to see these famous figures as images, rather than individuals. We piece together their careers through famous pictures, like Steve Jobs' classic pose that now dominates the cover of his autobiography, or Pamela Anderson in her unmistakeable red bathing suit. The fact that celebrities are people becomes irrelevant; for the common person, they are mental collages of memory and glamor that resonate for years, even if the suggestive image is twisted or disfigured.


Desmeules plays with ideas of identity, fame, and the strange way that the human mind reveres or recognizes certain things that have no direct impact on their lives, simply because popular opinion has placed so much importance on a certain person. Her work, although sculpturally based, is reminiscent of Warhol's portraits. He took a sterile, unemotional approach, playing with color rather than lighting, setting, or posture, and yet there is no mistaking his classic images of Mao, Queen Elizabeth, or Marilyn Monroe.


The similarities between the Desmeules' Marilyn Monroe sculpture and Warhol's serigraph are eerie, the same painted face, the striking, unnatural colors, and the instantaneous recognition that we have of both images, despite them being poor representations for the actual human form. Warhol was fascinated by the commercial nature of human beings, and how everything was for sale, including the image of an individual. Desmeules follows in those same footsteps, putting the human form on a pedestal of grotesque reality, and daring her viewers not to recognize who she is trying to show.


Her work also speaks to analytic cubism, Picasso's artistic brainchild, which was a movement that suggested forms from reality by disjointing certain parts and testing how the human mind could reassemble recognizable forms from memory and association. It also smacks of Sherwood Anderson's literary obsession with the grotesque, and how people gravitate to the bizarre and unusual, even as they shun people who don't fit in the fold or normalcy. Celebrities are praised for their beauty and perfection, yet that isn't what makes them so desirable or recognizable, as Desmeules' work shows. It is actually the very fact of their fame and prominence that draws us to them; they are as grotesque and outside the realm of normalcy as anyone with a humpback or a facial deformity. Our attraction is just as powerful in the opposite direction.
​
These sculptures are strange and perhaps disturbing to look at, but when you peel back the layers of your initial shock, you'll find that there is a far deeper conversation going on in the artist's work than slapdash papier mache and glued on facial hair. Desmeules calls her sculptures "surgeries", and that is an apt name for the savage cuts and underlying violence that these sculptures embody. We have already become used to our most beloved characters and celebrities going under the knife to maintain their picture-perfect appearance, and yet we don't allow that artificial manipulation to change our views on their beauty or desirability. These sculptures remind viewers of an image in a shattered mirror, trying to be put back together again, like Humpty Dumpty on a Hollywood scale. Yet, thanks to our communal obsession with fame and the inexplicable workings of our minds, we succeed where the king's men and horses once failed..." 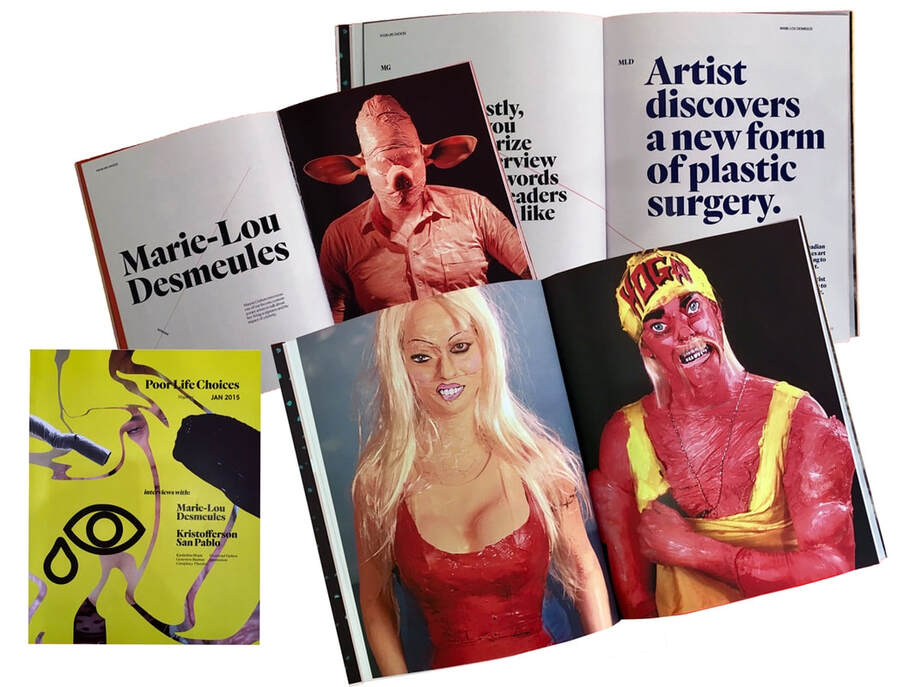 2021 till today
Co-Founder and Head of Art HARI Editions

2020
I Am Everyone Anyone No One (solo), Barcelona, Spain
Façade, Montreal, Canada
House of Hoarders, Fields Project, NYC, USA